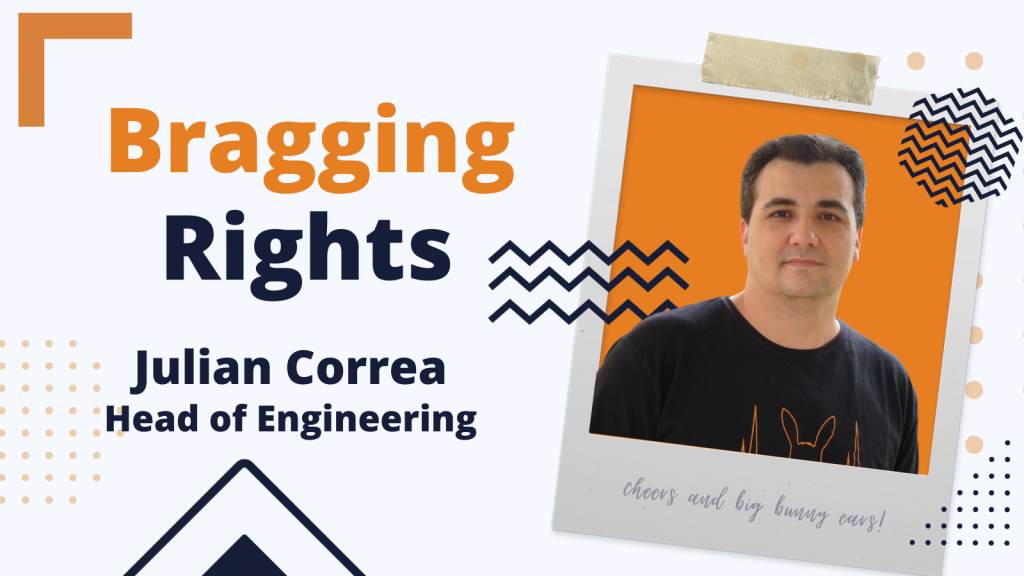 Let’s get to know Julian. This excellent person is proud of/that/for:

The ability to take on projects he knows nothing about and making successes out of them.

First example: Given a satellite project and having almost no clue as to all of the things that needed to be done or how to do them, Julian dove in and assessed the layout of things; he had to learn everything he could while also implementing everything he learned at the same time. That is not always easy, and not everyone can do it well. Many, many moving parts were at play including, but not limited to developing the software that co-manages satellite transmission systems, how satellites can work best together, learning about the entire makeup of a satellite and getting all of the parts needed to get it together, hire and manage people needing to work on and fix it when necessary, etc., etc. He did all of that from scratch and on time.

Second example: Running a satellite ground station, having parts coming from all over the world, overseeing the arrival of the parts and the assembly as well, while innovating within the project and creating processes to make it easier to navigate in the future. By the end of it, and in this particular situation, this project was the only one growing continuously when he left the company. Overall, Julian has the ability to improve anything he touches. Julian, the King Midas of process improvement.

He went to university all day and worked almost all night, for a solid 2.5 years.

Imagine this: you’ve woken up to study for a bit, then you head to classes that stretch over the entire day while having to be fully present, take notes, participate in class, retain as much as possible, study more later, and then head off to a job where you need to be just as present and focused well into the night, only to wake up early and repeat that again, and again, and again day in and day out for years. Exhausted yet? The energy level, sheer commitment, and determination of will it took to do this are mind-blowing. All the while, he was dealing with sickness in the family, declining invitations to socialize, travel, and instead choosing to take on more hours at work. Work ethic has absolutely nothing on Julian and there is no challenge that he can’t match.

He leveled up his career skills to better provide for his daughter.

When Julian’s daughter Gabi was born, they soon found out after trying every avenue available that she had a very specific milk allergy, and could only have one kind of formula. It so happened that that special formula was also expensive and only came in small quantities lasting a meager three days. With his job at the time not being enough to cover her formula along with everything else needed in life due to his salary being reduced and bonuses removed, he knew it was time to upgrade and was determined to make it happen. While working full time and helping to raise his daughter, he was also learning new frameworks, techniques, architectures, and languages intending to become a front end developer. He set himself a deadline – determined to learn everything he needed by that date – to get a new job to better support his growing family. He did just that and more, elevating not only his family’s quality of life but his career’s success as well.

Golden Nuggets: When you have the proper motivation, and solid determination, anything is possible.