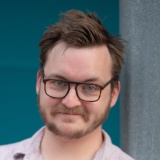 Reuben Nicholas Glaser (born March 3, 1994) is an American comedian, writer, actor, producer, and humorist from Milwaukee, Wisconsin. To date he has released two parody novels, written two films, directed and starred in a mockumentary, and has written for and appeared as a supporting character as an exaggerated caricature of himself in the satirical news series 'Friday Night Weekly' for its 3 season run from 2013 to 2015 and in the spin-off series 'The Reuben Report.' An active member of Chicago's storied comedy community and an alumni of The Annoyance Theater, he was the host, producer, and writer of the monthly live show Joak Park in neighboring Oak Park, which featured well over 50 of the most well-regarded comedians in Chicagoland and across the globe. Joak Park had been written up by The Wednesday Journal and The Chicago Tribune, which referred to it as a 'weird and unusual show.' His most enduring contribution to the American zeitgeist thus far has likely been creating the "Little Face Mitt" meme, whereupon at the height of the 2012 election he saw himself interviewed by outlets from The Washington Examiner to The Young Turks and the meme covered by Gawker, Buzzfeed, Mother Jones, MSNBC and The International Business Times, which cited it as one of the best political memes ever. Little Face Mitt lead to millions of active followers seeing, sharing, and creating their own unsettling images of then presidential candidate Mitt Romney with a disturbingly small face. Previously he served as a writer for The Onion's AV Club and for video game news site Gamerant.