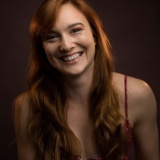 All voice over samples from Toni Jean Erasmus

I have a Diploma in Musical Theatre and Degree in Film and English Literature. As a performer I have acted on stage, in films and television for ten years. I have four years experience in voice over, primarily in dubbing, animation, gaming, narration and corporate. As well as my own South African accent I have worked in both general American and RP British. I work regularly in Cape Town through four of the main VO studios: Content Lab, Africa Audio Post, Blended Audio and AEMG as well as through my own home studio creating voices of all ages, styles and accents from little boys to old ladies.