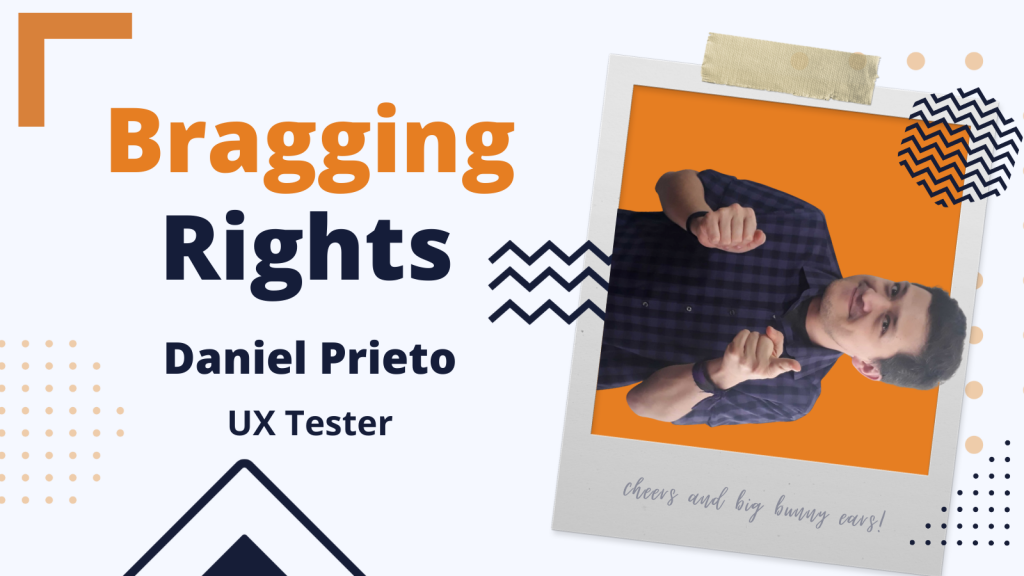 Welcome welcome to this Bragging rights. Hope you enjoy this perspective and yes, I asked the picture to be like this.  – Dani Prieto

Current position: UX tester (A.K.A. I break stuff)
Passions, loves & hobbies: Videogames, Comics, Drawing and memes
Amazing traits that stick out: There’s a loophole to be found and I will find it. I see the positive side of all things. Share the joy as much as I can.

Some amazing things about Daniel are:

What’s a great friend look like? Like this: some of his friends got caught by the music teacher skipping class one day, and instead of turning them in, offered them a proposition: “Help me out with the show that’s about to go on, and you won’t get in trouble.”

Naturally, they took the offer. As it turns out, however, they needed a couple more people for this show. And they came to Daniel, begging him to help them out. Being the nice guy that he is, he said yes. What he didn’t know was that he’d have to dance in front of his entire school – with girls from another school that he didn’t know. And, well, he’s not exactly a dancer…or the dancing type. But it was too late, and he was in too deep to turn back now, so onward it went until the day of the show. Nervous? Check. Anxious? Check. Have to wear weird, tight-fitting festival clothes for this dance? What?!? Uh, check, I guess. And through it all, he went out on that stage….. and rocked it! Kept his focus on the steps – and not screwing it up – and ended up having fun, of all things! Being a great friend can look many different ways; one of the ways looks like Daniel. (Just don’t ask him to help you out with dance moves.)

While everyone else was doing student council & similar things in their senior year, he decided to –  I don’t know – start a magazine from scratch without knowing how to put one together?

What he did have was a love of art & a talent for bringing people together for a common goal.  Daniel and 3 friends ran the whole thing; 1 did the proofreading & him + the other person designed and built the magazine. So, how did they get the people to contribute? Well, they started a weekly anime movie club, and after each movie, they’d ask the members “oh hey, what would you guys like to see next week?” and let people write in with suggestions. A couple of weeks into the club, they sneakily did the same thing with the magazine. “Hey, so we have this magazine, and if you’re interested, submit your stuff.”  It worked. But the marketing wasn’t done: they put posters everywhere. And I mean everywhere. Close the bathroom door there it is: “submit your post and art now!” Sounds funny, but it worked! To run a magazine while finishing your last year of high school? Not too shabby. They ended up printing 4 different issues, by the way.

Avid gamer turned game designer. Having only ever been on the user side of games, he got not 1 – but 2 positions where he was in charge of a team that created a game…from scratch.

So he helped create 2 games, to be clear. He took care of everything from designing the rules of game play to testing to localization to organizing the shifts of his team to social media to marketing to creating ideas for events as well as representing the games at conferences. All while figuring it out as he went, with only the knowledge of the user side of game play. And he loved it all. Knowing exactly what went into making a successful game only fueled his love for games. When we do what we love, the hours we put in feel less like work, and more like fulfilling play. May we all add play just a little bit more to our lives.

Went to University on one side of town while also teaching at his old school – which was his first job ever & was on the other side of town – and then finished his thesis right after all of that.

Talk about non-stop continuous effort to get things done. He actually had started working on the thesis before the teaching job but had to put it on pause while working. When he finished it and presented it to his jury, one of the professors remembered him and asked him why it took him so long to finish. When Daniel told him it was because he was teaching and finishing classes, it blew the professor’s mind. He proceeded to tell him how amazed & proud he was that Daniel handled all of that and still completed his thesis in the amount of time he did. Should also add the note that this particular professor was pretty hard on him in previous classes, so this compliment – combined with the understanding of what it takes to be a teacher – meant a great deal.

Being able to walk, and be physically active at all.

Born with dysplasia -, hip dislocation and collapsed thumbs, he had to have multiple surgeries as a very young child – the earliest being at 1 year old for his hip. Not too long after, he had to have surgery on his other hip, because the femur on that leg was a few inches longer than his other. At one point, he even had casts on both legs at the same time. It’s a miracle that he’s able to be as physically active as he is, let alone at all. The gratitude for just taking long walks is..immense. Though life can be unexpected, nerve wracking, frustrating, and harsh, gratitude can take you a very long way. Sometimes the steps taken are profound, sometimes they’re so small we don’t realize we’ve moved; each step, nevertheless, is worth celebrating.

Golden Nugget: ”There are many angles and many sides to every and all things. The more you see, the more you know.”