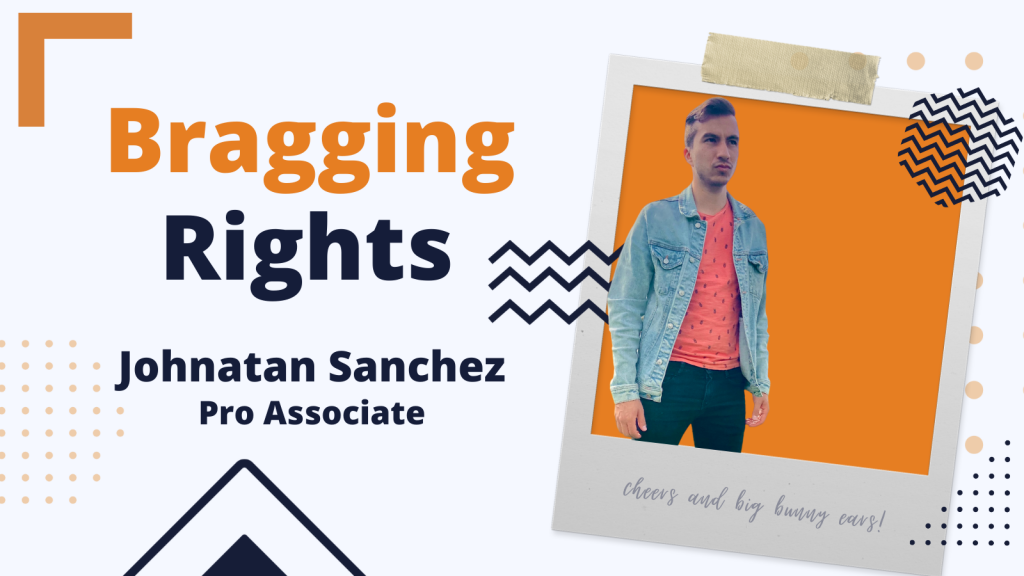 Let’s get to know Johnatan. This remarkable person is proud of/that/for:

For his final thesis/project in college, he recorded a full EP.

An EP stands for extended play, which is basically a mini-album, usually about 5 songs. These things take time – lots of time – to create and put out into the world. To bring this to life, Johnatan found musicians that would do it, took time to write the songs, figured out and found the instruments, recorded all of it in a professional recording studio, and voila! EP. Curious to hear it?? Look no further! Enjoy Te Pertenezco.

Overcoming severe shyness to now being one of the biggest question askers around.

We’re talking deeeeeep shyness levels here: panic attacks, profuse nervous sweating, blanking out or freezing all at the thought of talking to someone and asking questions. He would literally talk to no one and kept everything to himself. Though he very slowly made his way out of it,  during college, and specifically the final project that became Te Pertenezco, he had to really break out of his shyness. He had to talk to everyone and anyone possible to make it happen – friends, classmates, complete strangers – all while being very aware of any judgments they made on him. He had to be honest, face his fears, and take charge of it. And it didn’t stop there. Once the project was completed, he thought “If I wait for people to reach out to me, or talk to me, it won’t happen.” So, he opened up first, time and time again, and every time something new was learned and a connection was made. Johnatan went from being a hermit crab to a social butterfly, traveling and making friends all over the world. Life really does start outside of your comfort zone.

Went from unsatisfied in college to finding a degree path and transferring to it  – and a new country – almost immediately.

Johnatan was studying engineering and it… just couldn’t quite bring him happiness. Music, on the other hand, always had. One of his favorite bands was Skillet, and one day he saw that the school that the lead singer of Skillet went to had a program for music in the US. He was in Colombia at the time. He told his parents what he found, and they talked it over, letting him know if he could arrange to get the school all on his own, he would have their support. No sooner said than done he turned around and let them know he was leaving to begin the program. Up to the US he flew, and 10 months later he had graduated his program, not only with a ton of knowledge but also some amazing friends and connections. After seeing some sights, back down he came to go to college for music and sound engineering, leading him to become a freelancer and have the freedom to wander and work wherever he so chose.

Being able to work for a company full time that aligns with his values, while knowing he’s a part of something bigger.

Being a part of an ever-growing and developing ensemble of talented characters is something Johnatan doesn’t take for granted. This opportunity changed his life and opened his eyes to a completely new way of being and doing things. It’s brought the intrepid learner in him that he knew existed but now flourishes beyond what he imagined. An example? Going from someone who would fall asleep while reading books, to someone that is always seeking them, asking for recommendations, and can’t get enough of them is a big leap. Overall, the well runs deep with gratitude over here, and every day is a new adventure to be explored. Take the opportunities given to you, and if they aren’t, make your own. It just may lead you to where you wanted to go all along.

Golden Nuggets: If something is preventing you from doing what you want in your life, ask yourself: what’s it matter? What’s really holding you back? Are you sure it is what you think it is? It may lie more within you, than on the outside.