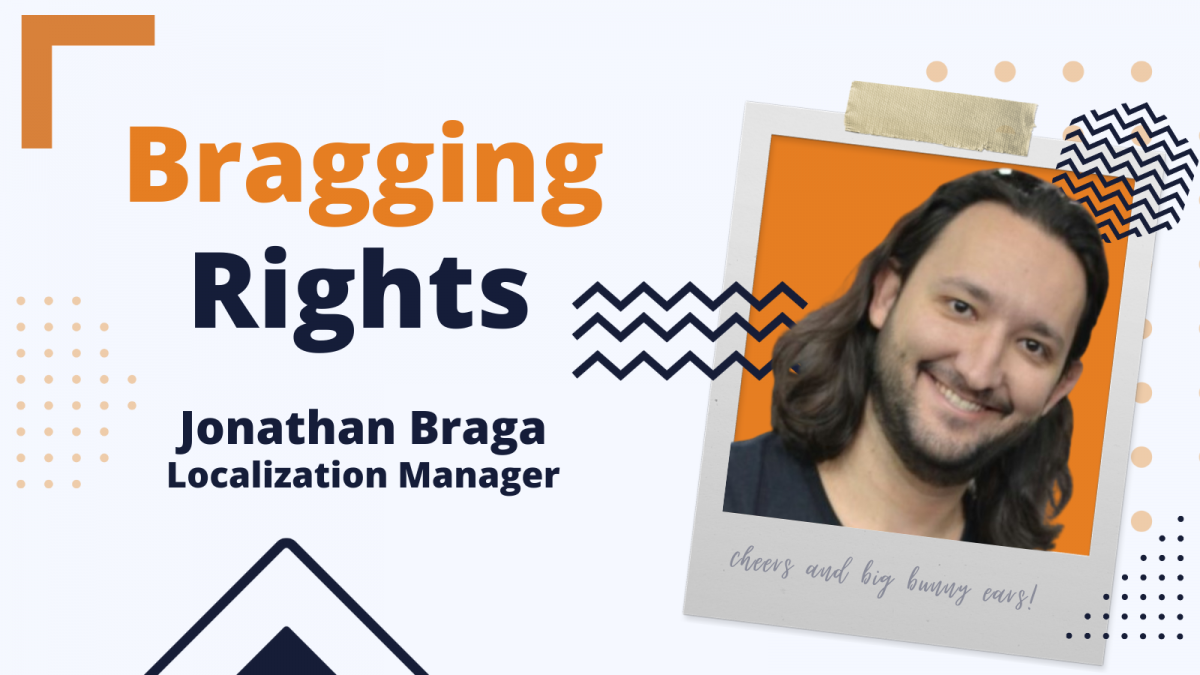 Current position: Localization Manager
Currently hanging out in: São Caetano do Sul (SP), Brazil
Passions, loves & hobbies: Travel, languages, heavy metal music ( and Pearl Jam), working on being more responsible with the environment through any means, including vegetarianism.
Thankful for: Being able to see his dreams of 10 years become a reality because of remote work.
Amazing traits that stick out: Outgoing, optimistic, sense of humor, laughs easily, loyal, responsible, adaptable, easy-going

Let’s get to know Jonathan. This judicious person is proud of/that/for:

Turned paper into practice with his MBA project becoming a real business solution.

When finishing his MBA, Jonathan came up with a process for a business that would be a running force in the company’s success. One of the people that saw this paper (which he got an A on, by the way), was a business owner that took great interest in his business solution. In fact, there was so much interest that they hired Jonathan to make it a reality! He worked there for 3 years, managing the project. The key lesson that came out of this was: When taking something from the academic world and adapting it to the real world, just go for it. Yes, you need metrics and numbers, but you also need motivation. Do it, and grow from there.

Is a drummer in one of the very few cover bands that Pearl Jam themselves approved to sell their version of Pearl Jam’s songs.

Because they sound that good.

Morphing from a super analytical, excel-sheet-for-the-world type of person to someone who is more open and can navigate the unknown.

Jonathan was the type of person that if a trip were to be taken, he’d have everything planned: the exact budget for hotels and which ones on what days, the budget for food, and schedule for each day so he would know roughly what to expect from the area and how much it would cost, the time needed to wake up and sleep to be able to do everything on the schedule, and everything was planned out ahead of time. He built the plans to work and worked the plans he built. Then, things changed. His then-girlfriend, now wife, had a dream to see all of the countries in the world, and they started talking about backpacking for travel. Her job was stressful, and he didn’t have one at the time, so they decided to go for it! She took a sabbatical, they sold their car, furniture, and everything they had, and left for a 6 month trek around Europe. The only thing they had planned was the first 2 days at a hostel, and the rest was open. Within the first couple weeks, Jonathan flew back almost 40 times. The master of spreadsheets didn’t know how to manage the unknowns of backpacking and adventuring, and it showed. Slowly, he became aware of the fun that could be had when not everything was set in stone. Synchronicity and adventure cannot be planned. It opened up his eyes to different ways others in the world lived. There were times they had no food or money for days, they couch-surfed and met amazing people who became lifelong friends, there were miscommunications with language barriers and authorities, drove 200km in a desert without seeing a soul, things were stolen and when found, he decided to let them have it to sell because they needed it more than he ever would. 6 months and 17 countries later, new views of the world were a part of him, never to be taken away. Empathy and understanding for a world he didn’t previously know were in a place he didn’t know he had, and life lessons came along with him. You can plan to your heart’s desire, but you can never control the outcome fully. When you know better, you have the responsibility to do better. Once you see how life is outside of your comfort zone, country, culture, what you thought the world was – you can never go back.

Leading and managing a team that raised enough money to build a brand new radiology center for cancer from the dirt up.

From 2007-2011, Jonathan was an IT manager. Somewhere, the idea came up to help raise money to build a new radiology center for cancer, and Jonathan became one of the people in charge of the department to do it. They – his call center team –  partnered with a hospital and began the journey of raising over 11 million reals (BRL). The 50 person team, working in rotating 6-hour shifts for a total of 12 hours of calling the community a day, persevered. They, over a few years with consistency and determination, did it. All of the money raised built the new center from a patch of land in a field to a completely new, modern center! The level of caring, persistence, motivation, and patience it takes to do this for years is astounding and admirable. The team, and the hospital staff, were amazing to work with, and this experience is one he will always take with him, knowing his work will live on and help thousands of others for years to come.

Questioning the world around him and rebuilding himself as a person.

As a man, husband, and future father, Jonathan noticed the world around him, that one he grew up in and was accustomed to, was not kind to women and girls. Things that were commonplace – phrases, ways of acting, talking, being – were actually chauvinistic and disrespectful. Once he became aware, he could not go back to ignorance. And so, he took it upon himself to grow and to become better. He listened to podcasts, interviews, read books and articles, had conversations, and changed his viewpoints on many a thing. It can be hard to break patterns that society around you tell you are fine, they’re normal, that’s the way it’s always been. When you know that they’re wrong, it’s on you to stand up, grow, change, and then speak up in order to make life better for everyone. Since his eyes have been opened, Jonathan continues to do the work, continues to grow, learn and educate himself, along with helping others to now do so as well by calling things out as he sees them, and leading by example. Not only does he do this in this aspect, but also in the realms of the environment, spirituality, and human decency. Becoming a better person starts with daily actions and one step at a time. To be alive is a blessing. Take care of that blessing.