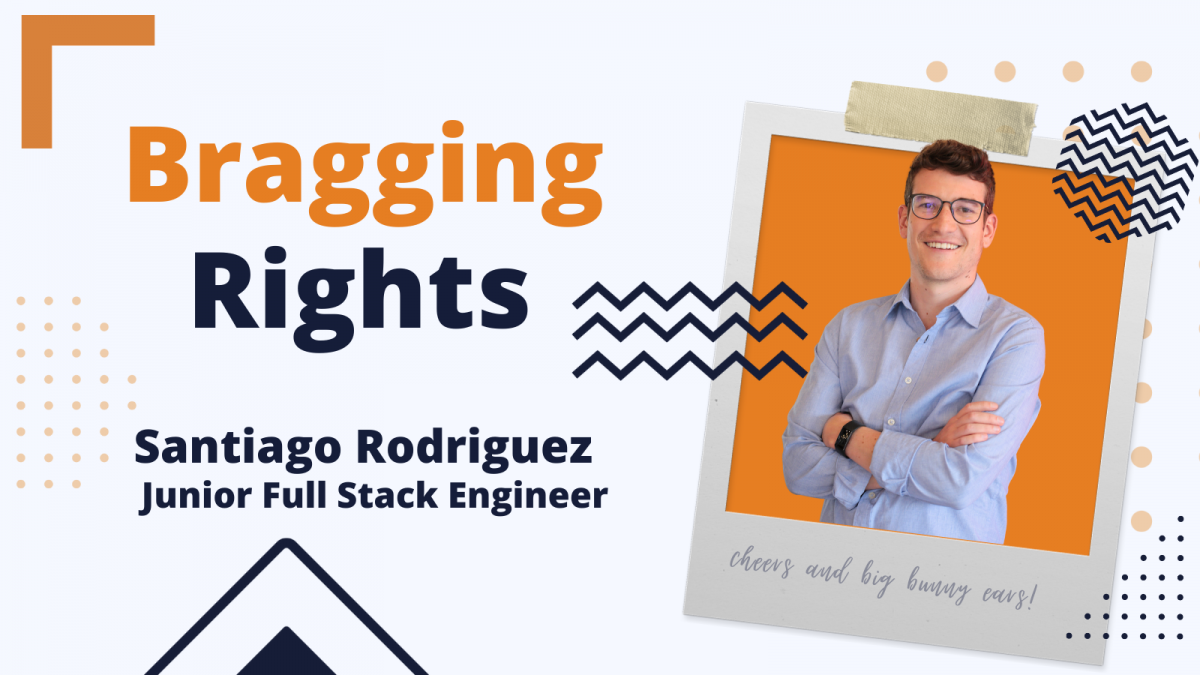 Current position: Jr. Full Stack Engineer
Currently hanging out in: Bogota, Colombia
Passions, loves & hobbies: Loves building things – toys, legos, and even started a company as a way to create something from scratch – culture, team, solutions – and became a software developer because he can continue to build things and have the joy of watching people use the products.
Thankful for: Working remotely, and having control over how he can spend his time, which is mainly with his wonderful wife.

Let’s get to know Santiago! This steadfast person is proud of/that/for:

Realizing that he wasn’t the right person for a job, left, and became what he needed.

Joined a company with high hopes and confidence, and once he got into the role and the thick of it, realized that the person needed to do the best job wasn’t actually him. So, he stepped up, and let them know that he needed to step out. With his weak points now recognized, he joined a self-paced program to learn coding, software development, and web development. This program was not for everyone. There were no set teachers, really, and with the education being mostly self-paced, he was paired up with others that also wanted to learn. All of this happened right about when the pandemic hit. It took some serious discipline, understanding, patience, and tenacity to finish the program, and finish he did. Within a year, he became a software engineer. It’s one of the happiest decisions he’s made. Knowing when to step down is just as invaluable as knowing when to step up.

Fun fact: Santiago started his own agriculture company where they designed hydroponic kits! During a time when things were particularly time-sensitive – he recently had designed a kit, invested money into making a batch of 50-100 of them with other prototypes needing testing – his father passed away. It came as a complete and devastating shock. His father stood for a sense of security, strength, leadership, and groundedness; all of that was taken away at the same time that so many new things were appearing and changing in Santiago’s life. It was not the easiest of situations, and with a heavy heart, he navigated getting everything resolved with his company’s new kits, along with his father’s funeral. The strength alone it takes to do that is deep, and palpable, to anyone that has gone through similar. As time has passed, he uncovered grace in healing, unearthed his own strengths, made his own sense of security, fostered his own style of leadership, and found independence in his voice through it all.

Building the relationship he has with his wife.

Unlike most relationships, they take a very understanding, very human approach to communication, both acknowledging that neither are perfect and that life will throw them happiness and curveballs, sometimes simultaneously. When it comes to being a certain way because society tells you to, the cultural norms don’t fit in this marriage. Both have worked in the freelance world, and have a knowledge of what it takes to do what the other does. With sincerity, laughter, humor, and love, they get each other. They know it takes honesty, a sense of realism, and a dose of compassion to make it truly work. It’s been 8 years and counting. There is no stop in sight.

Taking a 700 km pilgrimage through Spain

Covering 20 km a day, Santiago made good time; but mostly, he made good use of his time. Having just quit an investment job, he decided it was a time for a change: a deep change. With the idea of the pilgrimage in his mind for a time, he took action and left for Spain. He saw many things and met some very interesting, entertaining, unique, and good-natured humans. Most of the time, however, he spent with himself, taking time that had always called to him to be, to release the breath he was holding, to allow the light in. When you spend time with yourself and face the one who rules your life – you – realizations can be awoken, and transformations can begin. He grew up, and in, to himself. Many things came to his awareness through the daily practice of walking and thinking, with the main notion being this: Stop waiting for something to do with your life. Search, look and find what you want to do, for it will not come to you if you are also not going to it.

Golden nugget: Listen first. Give advice only when asked. Compare yourself only to your past self.