Freelance contractors/independent contractors and freelancers are invaluable assets to any workforce. But that’s just the beginning of the story; as any project lead will tell you, managing them is one of the facts of life of distributed workforces. And yet, even if they power the successes of many companies, most people don’t know the clear-cut differences between both.

In order to help you achieve your end goals more efficiently, we’ll help you distinguish between them. Then, we’ll recommend when to use one or the other. In a world where 20% of jobs in the US are contract freelancers, it pays to know the difference. Since at Bunny Studio we are experts on creative outsourcing, we thought it would be a good idea to clear up some lingering myths and misconceptions.

Freelancers essentially run their own one-person businesses. They have to manage the day-to-day operational aspects of work, market themselves to clients, and provide quality results in their niche. Also, they typically operate with a wide range of clients and organizations. While it’s normal for freelance contractors to have a main client, they often have several simultaneous gigs. They also have the freedom of setting their own rates, work hours, work environment, and how to deal with their taxes.

They normally work on a “per gig” basis. Thus, their job typically ends and begins under very clear boundaries and guidelines.

What are some examples of these self-employed workers? Copywriters, bloggers, audio engineers, graphic designers, and programmers are typically freelance contractors. Approximately 60 million people in the US alone do some form of freelancing, according to Statista. 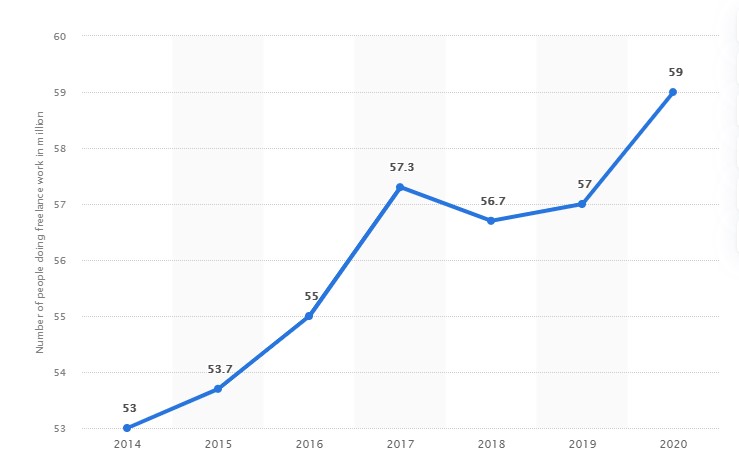 On the other hand, independent contractors are temporary employees of sorts. They may also be working for more than one client at once, but they typically take on longer-term contracts. They’re often called freelance contractors as well, adding to the confusion. The main difference is that they’re under a contract that legally binds them to a company or organization. And, while this contract does not often require exclusivity, it constitutes an agreement to do a certain job sustainably over a period of time.

These contractors also may work in their own space, or at their clients’ offices. Common examples are doctors, lawyers, and nurses. But also, we could include any of the professions above too.

But, of course, this doesn’t fully settle the question about how freelance contractors/independent contractors or “plain” freelancers differ. We’ll have to take a more detailed look below.

So, we’ve established that freelancers are self-employed. This means that they often work in short-term gigs. But, freelancers and independent contractors also differ in other key ways. We’ll list some of them off, and explain them below. Freelancers:

Some Differences with Independent Contractors

In general, freelancers tend to agree on a fee, timeframe, and conditions for a job’s completion with the client. Then, they get to work, and once everything is done to the client’s satisfaction, they get paid. This happens on a per-job or a per-gig basis.

On the other hand, freelance contractors/independent contractors frequently have more limitations. This is mostly because they tend to sign up for longer tenures with a company or organization. Therefore, while they technically still are freelancers and not permanent employees, they have more obligations. This can range from having to deliver on a wider set of tasks, to having to stick closer to organizational guidelines, or all of these.

Moreover, contractors usually work on an hourly basis. They can also sign a contract directly with a company, or be subcontracted by an agency. If it’s the former, the contractors generally still have to pay for their own taxes just like freelancers; if it’s the latter, then sometimes the agency may take care of taxes.

The IRS Has Its Own Take

But what does the IRS think of the difference between freelance contractors/independent contractors and freelancers?

If you are an independent contractor, you are self-employed. To find out what your tax obligations are, visit the Self-Employed Tax Center.

You are not an independent contractor if you perform services that can be controlled by an employer (what will be done and how it will be done). This applies even if you are given freedom of action. What matters is that the employer has the legal right to control the details of how the services are performed.

If an employer-employee relationship exists (regardless of what the relationship is called), you are not an independent contractor and your earnings are generally not subject to Self-Employment Tax.

So, while freelancers and contractors are functionally different, they’re the same for tax organizations such as the IRS.

And, of course, this is not all negative either. Since freelancers and independent contractors have to purchase their own equipment and pay for other expenses, the IRS offers some tax deductions to make their lives easier. This graph from Next Insurance gives a more in-depth look at these deductibles: 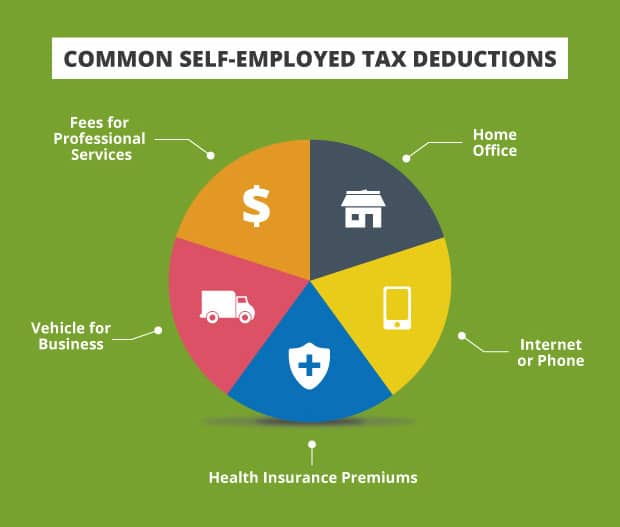 Above, we touched briefly on the question of rates. Freelancers generally have more freedom to set the type of rates they want. Whether it be an hourly rate or a flat rate for a completed project, they have total freedom. When a freelancer sets their rates, it’s the client who has to agree to their fee.

Both freelance contractors/independent contractors and freelancers can outsource part of their work if they choose to. While technically self-employed, they can act like any other business owner and hire employees for part-time or ongoing tasks. Freelancers, for instance, can outsource the organizational part of their day-to-day work. Things like social media, marketing, outreach, sending proposals, and more are very good targets for outsourcing.

Other targets for outsourcing go beyond these tasks, and more into work itself. For instance, a freelancer or contractor may hire another professional to take care of part of a job. In the case of copywriting, for example, this could include proofreading, editing, and final pre-delivery revisions. Sometimes an agency will take care of these as part of their final value add.

Of course, some contracts or agreements may prohibit some of these practices. They may require the independent contractor especially to deliver work done only by their own hands. Or, in the case of sensitive material, a pre-existing security agreement may make outsourcing of any kind impossible.

Most freelancers tend to work on their own schedule. That means that they can have flexible work hours and the type of work-life balance they desire. Of course, this also means that they have to be very good at task-setting, meeting deadlines, and staying disciplined.

Freelance contractors/independent contractors can also work like this, of course. But, they often have to adhere to their clients’ pre-existing guidelines. This can sometimes include a 9-5 agreement, for example. In the case of contractors, employers are even more mindful of getting their money’s worth. Therefore, they create these agreements to create a “pseudo-employment” situation.

But, does this situation usually result in net benefits for the contractor? It depends.

Health insurance, retirement, paid vacation, days off, moving days: these are all very important for employees. But, they’re frequently not on the cards for freelance contractors. In essence, they’re responsible for supplying their own benefits and retirement packages.

What typically happens, though, is that contractors take into account all of these things in their rates. While their clients technically don’t pay for these things, it’s up to every professional to know the hidden costs of doing business. Generally, this is the way that contractors deal with health insurance, taxes, etc.

Another hidden benefit is that many contractors work on a contract-to-hire basis. This entails working for a certain amount of time at a company or organization with the promise of full-time employment and benefits later. The idea is that they work for a set amount of time, and in the end, the company either hires them or puts an end to the professional relationship.

The Value Add of Freelance Contractors and Freelancers

Freelance contractors and out-and-out freelancers are the lifeblood behind many industries. Just last year, 48% of businesses hired freelancers or contractors as part of their day-to-day operations. Without the nearly 60 million self-employed people, many businesses would find it impossible to thrive in this hyper-competitive environment. This is true for even the tech giants of the digital world:

As of March 2019, Google’s workforce comprised of 120,000 contractors/freelancers, more than the number of permanent employees on its payroll, which was around 102,000.

But what does this mean to you? It means that if you need to run a competitive business, results should be at the forefront of your mind. But you might find that operational costs, the difficulty of maintaining long-term employees, and other issues may not make hiring full-time positions tenable.

This is where comprehensive solutions like Bunny Studio step up; we pride ourselves on working in lockstep with your exact needs, offering turnkey creative solutions for your every need, whether it be design, copywriting, translation, voice-overs, or making the perfect promo video. If you need to learn more, don’t hesitate to contact us. Your dream freelance contractors and freelancers are close by.