“French is the language that turns dirt into romance,” so they say. And tis’ not all myth! The French language is actually one of the 44 Romance languages descended from the Roman empire. Sadly, Romance languages have nothing to do with the notion of love, though others might beg to differ. Spread far and wide by colonists, it has evolved into many different French dialects.

In today’s modern-day, the official French language has earned its sixth place as one of the most spoken languages in the world. Splayed across multiple continents far from France, over 275 million people own the tongue. The French proverb says, “Qui n’avance pas, recule.” It translates to “Whoever does not move forward recedes”. Just like all things in life, staying on top of the pecking order of both the business and entertainment industries requires seamless communication. Mass media or the building of relationships, understanding who speaks which French dialect can personably bring you a step closer to your audience.

Dialects. Languages. Accents. What’s the difference? The meaning of these words is often muddled. If you are looking to hire a translator, you will need to know the distinct distinction between all of them. We’ll untangle the confusion with the glossary found below.

Dialects are subset varieties of official languages. They originate and are spoken in particular regions or social groups. For instance, major languages such as German, French, and Arab all have dialects. Because they are commonly geographically specific, they can often be an indication of where a person is from. Dialects are distinguished by a change in grammar, vocabulary, and pronunciation of the official language and can sound very different from one another. In contrast, official languages have a standardized written and spoken form that is used for documentation and communication in governmental bodies.

The word accent is sometimes used interchangeably with dialect. Linguistically speaking, the accent is just one component of a dialect. It defines how words are pronounced in a language or dialect. Comparatively, dialects are entire languages comprising of a system of vocabulary, grammar, and accent in both spoken and sometimes written form.

Why Speak Any French?

Est-ce que tu parles français? Do you speak French? There are approximately 80 million native speakers in the world and about 190 million secondary speakers. With French being the official language recognized in 29 countries, picking up the language sure wouldn’t do you any harm!

Birthplace to the French language, French is spoken by 19.71% of the European Union population. It is the third most spoken mother tongue after English and German. Interestingly enough, Africa holds the highest number of French speakers in comparison to all other continents including Europe due to historical colonization. It is in fact spoken in 31 Francophone countries of Africa and the fastest growing language in the continent. The language is used officially in the below countries:

Thinking of expanding your business? Why is French so crucial in penetrating new markets? Many French-speaking countries hold strong economic positions in these turbulent times. Below are some examples.

Let’s start by looking in the EU. France’s highly developed economy is led by tourism, pharmaceuticals, and manufacturing. France brings in more than 1,100 foreign investments every year. It has the world’s seventh-largest economy by nominal figures and the third-largest economy in the EU. To add to the list of strong contenders in the EU, Switzerland has the second-highest GDP per capita in the world. It is the third richest landlocked country following Luxembourg which is also a French-speaking country. The European Union is a gold mine full of viable opportunities. Investment policies in the EU provide stability and legal certainty. With no trade barriers, it is a conducive environment to bring your business to the next level on the global platform.

In the great white north, Canada’s economy is the tenth-largest GDP by nominal numbers. With America as a major trading partner, the country makes for an attractive market to tap into. 20% of Canadians speak French as their native language. Depending on which of the 10 provinces you are localizing your brand in, French is a requirement based on the local legislation. Quebec, for example, has only French as its official language. Whereas both New Brunswick and Manitoba are bilingual and other parts of the country deal mainly in English but with French as a second language.

The Importance of French Dialects

Mark Weinreich said, “a language is a dialect with an army and navy.” The Tower of Babel continues to evolve the French language, amounting to approximately 28 dialects solely in France itself today. But what is the significance of communicating in dialect versus using the standardized language system? How can it help businesses grow? There is a saying that goes “if you speak to the world, you speak to nobody.” Since native French speakers are splayed all around the globe, dialects build a bridge that speaks specifically to a regional audience. This builds a stronger rapport and brand authenticity.

Localization is key to penetrating new markets. It helps to build both brand awareness and affinity via tweaking marketing content to the specific interest and language of the local demographics. No doubt, language is only one element in localization. But communication through accurate use of accent and dialect develops instant trust, recognition, and familiarity with the brand. It creates a longer-lasting impression with your audience. This is the first step in helping your marketing strategy deliver maximum results.

Not only does the business world recognize the advantages of dialects, but even the media such as the BBC is also recognizing its benefits. As such the news channel has been actively employing more diverse racial broadcasters.

Standard French vs Dialects: When for Which

Marketers often grapple with how language-specific communication should be. In all truth, it’s the reach of quantity versus quality. It is no doubt that producing individual marketing material each in different dialects can be expensive and time-consuming. Even though so, the appeal is also made that much stronger to specifically targeted consumers.

When to Use Standard French

When to Use Dialects

Let’s start with modern-day France. The Parisian or metropolitan French is the official language in France. It is being taught as standard French to anyone who is learning the tongue. Here’s a table of the different dialects and languages spoken in France today. 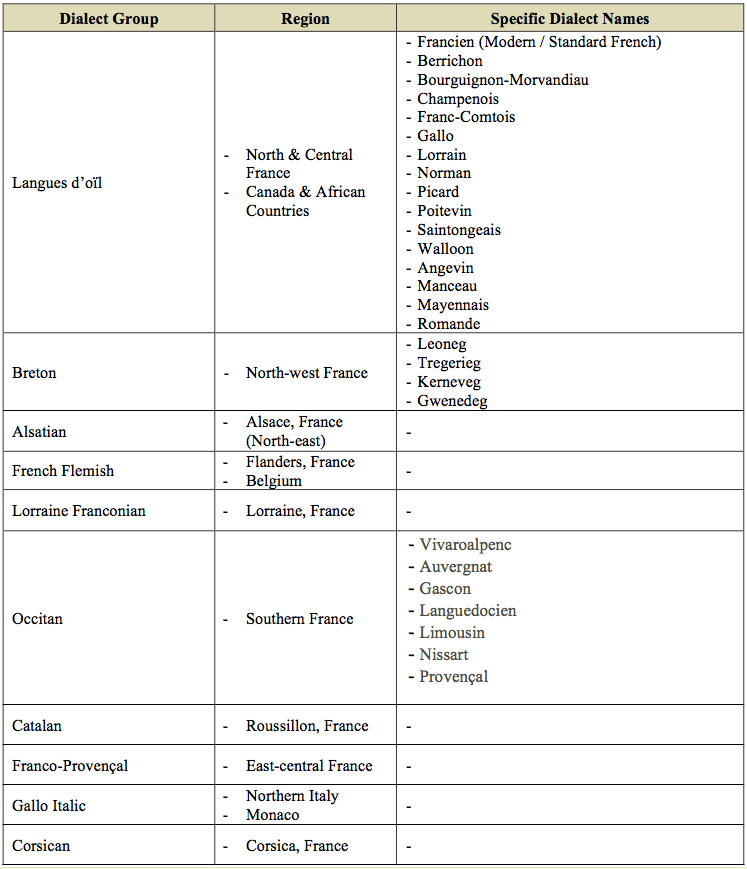 Parts of Cambodia, Vietnam, and India speak French because of the rich history of French colonization in Asia. In America, a small group of people in Louisiana speaks Cajun French. As with all languages, history and local languages greatly influence the birth of a dialect. Let’s look at some major differences in French dialects and accents around the world.

Are you looking to create a French audio ad? Now that we’ve discussed how employing the right dialect can make a difference in marketing, let’s talk about hiring the right cast. Simple French translation just won’t make the cut as we now have to take into account the French accent and tone of the dialect. Here are the top factors to bear in mind in the search of that golden voice.

Every marketing strategy requires you to know your audience. We’re talking about demographics, location, and interests. Aim small miss small! If you are zooming in on a specific target audience who speaks a certain dialect, you will be able to appeal to them more effectively than casting a wide net. This means more conversions and a higher ROI. Most importantly, set a list of requirements so you don’t go in blindly. Specify the voice quality, gender and language dialect you are looking for in a voice actor to ensure accurate results on your ideal recording. Learn how to describe a voice from this article.

Your budget comes into a huge play as well. If you have a limited budget, you will not be able to re-create your ad in many specific dialects. If so, you might choose to go with standard French for nationwide broadcasting. Some might consider adapting to a wide audience approach to test for the response. After this, one can then narrow down on specific regions for the localization of content. Another economical option would be to record a voice over for your commercial in a different dialect instead of redeveloping the entire ad.

These days, there are many affordable and reliable platforms like this one that can help you to create an entire French audio ad in a short time frame. In order to appeal to your audience, you need to first familiarize yourself with how the local accent sounds. This means doing research thoroughly on how authentic speakers sound in the region. The next rule of thumb is to only hire native speakers from the region who speak the dialect accurately. To do so, you can pick them out by listening to the demo clips of potential voice actors. With them, compare the accent with samples you have researched before making your choice.

To Sum It Up

With French being such a widely spoken language, it is a useful bridge of communication to promote your brand on the global stage. It is unfortunate though, that translation often loses the correct meaning of brand nuances and personality. Understanding French dialects is the very first step towards effective localization. We can’t stress enough how hiring the right native speaker for your audio ads can accurately represent your brand’s voice authentically. With both the right translation and voice presentation can you ensure that your key message resonates with the audience. Do you know what your audio ad requirements are?

Rachel Weiss
Rachel Weiss is currently Branding Senior Marketer at Bunny Studio. She has over 10 years of experience in communications specializing in public relations and digital content strategy. A bonafide Bunny pro writer since 2018, her portfolio spans the US, UK, Europe, the Middle East, and Asia. Rachel has a Bachelor’s Degree from the UK in Biomedical Sciences and is certified in Creative Writing, Nutrition, and SEO. She satiates her globetrotting addiction by making the world her office.