It’s no understatement to say the world’s changed during these past two years. And, with evolution also come advantages, challenges, and new ways to achieve results. Understandably, the job market is not a stranger to this vast restructuring. The emergence of the gig economy and the sharing economy very effectively signal the dawn of a new day. In this article, we’ll take a look at the “gig economy vs sharing economy” dichotomy to understand where they both differ and align.

Why is this important? Because we live in an age where we’ve redefined work and how we relate to it. It’s no surprise, then, that the employee-employer relationship is one of the first to undergo changes. More and more Americans are opting out of the 9-5 job structure that seemed to define previous generations. And, as it turns out, the number of freelancers is increasing by the minute. As of 2021, nearly 60 million Americans are self-employed.

The gig economy allows individuals to work for companies or other individuals on a part-time, or per-job basis without the need for an employee/employee commitment.

While these jobs can be casual, they’re often professional, and just as serious as in any full-time profession. So, the gig economy tends to be flexible, temporary and built on a per-job basis.

As mentioned, a key factor in the gig economy is flexibility. This is mostly because:

No doubt, the gig economy is a tremendous benefit for both freelancers and companies alike. Not only do freelancers have a wider-than-ever selection of jobs and services that they can offer, but companies also have an enormous range of professional, affordable talents to pick from. Adding to that, there’s also an unmatched convenience for both sides; freelancers can comfortably choose their jobs, and companies don’t have to spend extra funds on infrastructure and the built-in costs of full-time positions.

Where Does the Gig Economy Take Place?

It would be a mistake to lump informal work with the gig economy. For the purpose of this article, we will define the gig economy as high-quality, readily available professional services. And it’s no surprise that most—if not all— of this work takes place online.

Professionals can find work in either open marketplaces or managed service firms. Here, the client posts a job and the freelancer applies, or the service firm sets them both up appropriately depending on their needs and abilities, respectively.

In our wide-ranging article about online professional services, we said the following:

On the one hand, open or marketplace firms enable the interaction between customer and worker by letting companies post short-term jobs/gigs. Then, they select the worker better suited for the job based on their reviews, reputation, and interaction with previous employers. Additionally, in this sort of platform, any person can participate as a work provider. In consequence, in this model, the quality of the outcome is not always guaranteed.

On the other hand, managed services firms are more involved in the whole interaction between clients and work providers.

One of the largest differences between the marketplace and managed services models consists in that the latter guarantees the quality of the job-to-be-done. This fulfillment requires, in most cases, vetting participants of the work marketplace. Another requirement is exercising fuller ownership of the delivered services. Thus, quality guarantees become a surefire strategy for success

As you can probably tell, our very own Bunny Studio is on the managed service side of the scale. We believe in pairing clients with only the highest-quality professionals at every turn because we care about both satisfaction and results.

What is the Sharing Economy?

The sharing economy mainly helps people share their unused assets. Essentially, these assets become a monetized commodity. Think about Airbnb, and how it allows clients to rent out their apartments to users on the platform.

Then, there are platforms like Uber, which do the same with cars and drivers. In a way, these platforms act as mediators between the owner of the shared item or service and their clients. Some refer to this as the “Uberization” of the economy. We don’t see this as a bad thing at all; to us, it heralds the boom of a collaborative economy.

Some examples of the sharing economy are:

This infographic by Vector sheds more light on the topic: 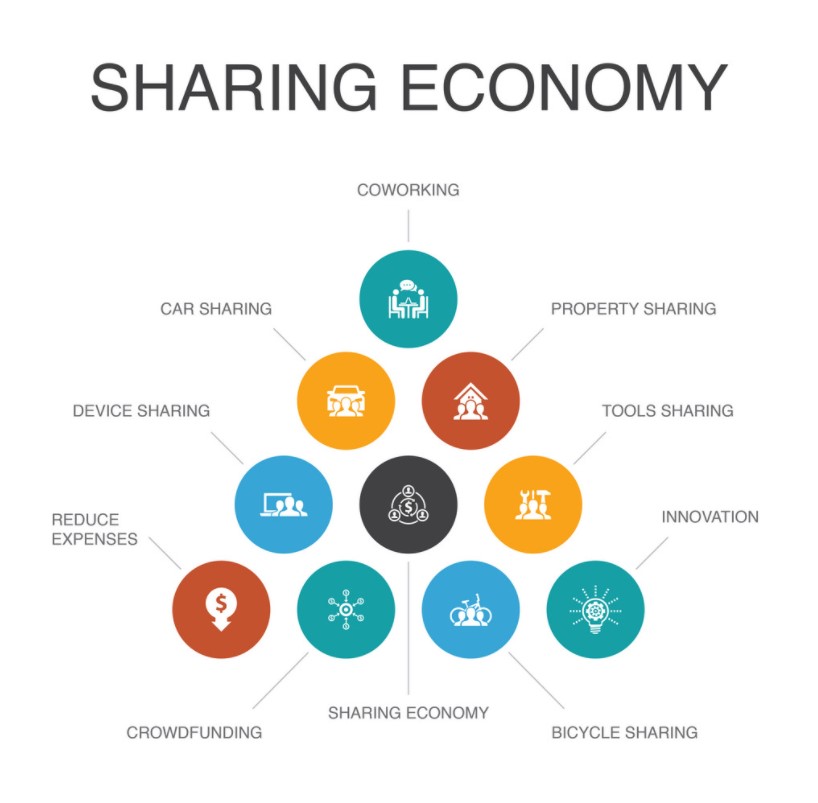 In the gig economy vs sharing economy debate, many people tend to conflate the two. As we said above, freelancing sites can be seen as a part of the sharing economy, bridging the gap between consumers and professional services.

Therefore, a sharing economy concerns itself with pairing individuals or organizations with quality goods and services — the shared assets. On the other hand, the gig economy is about the structure of labor, with flexible jobs and independent freelancers and contractors.

Therefore, when it comes to the gig economy vs sharing economy, here are some of the key differences:

The synergy between both is what creates the burgeoning scene that we currently see in the freelancing market. And, owing to the COVID-19 pandemic, it seems that the shift towards unstructured, do-it-your-way work is only going to be increasing. Some of the main takeaways from our study about online professional services say:

(…) the last three years saw a net increase in demand for online professional services. As seen before, in the last three years the market for online professional services has increased its volume at an average rate of close to 27%. According to the Oxford Internet Institute Online Labour Index12 (OLI), job postings for online freelancing increased around 40% between January 2017 and December 2019.

Moreover, there was a market cap for freelancing of close to $10.8bn in 2019. While the pandemic has had an adverse effect on these numbers, it looks like we’re gearing up for a one-of-a-kind economic rebound as we start to defeat COVID-19.

According to Global News, the expected rebound is going to be astronomical when it comes to freelancing platforms alone.

If anything, it looks like the future will be brighter than ever with the growing mass adoption of freelancing and the gig economy by both employers and professionals.

The gig economy vs sharing economy situation offers a very good lens into our industry.  The ways to share work and assets provide novel ways for clients to reach high-quality goods and services. Moreover, it allows freelancers, who are at the forefront of adopting remote work and flexible schedules, to engage with work on their terms.

At Bunny Studio, we endeavor to provide the best of both worlds: to connect our clients with the best high-quality creative services around and to create a space for freelancers to do their best work in friendly, relaxed conditions. We’re proud to say we’ve achieved—and will continue to achieve—both of these aims in spades.