Interpreter vs Translator- Similarities and Differences

Interpreter vs translator, what is really the difference? Persons who do not deal with foreign languages on a daily basis might often confuse the two. Both should transfer the words, meaning, and substance of one language into another. After all, isn’t it, in essence, the same process?

But with any linguistic process, things are more complicated than they seem on the surface. So the answer to the above question is yes and no at the same time.

As Cyracom rightfully notes, “while laypeople tend to use the words “interpretation” and “translation” interchangeably, the language services industry treats them as completely different services.” So that is where the problem lies.

Both interpreters and translators are supposed to transfer the words, meaning, and substance of one language into another. But they approach that task in a completely different manner. After all, they deal with different presentations of a foreign language.

Interpro succinctly presents the definitions of the two.

But, defining the similarities and differences between translators and interpreters need some more explanation.

Interpreter vs translator- Similarities and differences

One Hour Translation sums up the similarities and differences between translators and interpreters. When talking about similarities, they point out the following:

Talking about the differences between translators and interpreters, here are the main points, with some modifications:

Interpreters and how they work

On the surface, it might seem that interpreters have a simple job. A foreign language speaker talks, he listens and then transfers his words aloud into a target language.

But, not only is his job far from simple but is actually one of the more complex around. First of all, as Lion Bridge notes, “interpretation isn’t a word-for-word translation of a spoken message. If this were true, the result would make little sense to the target audience—sentences in one language are often constructed in an entirely different way to in another.”

Even more so, during their work, interpreters have to tackle a number of technical hurdles. These hurdles differ in the two types of interpretation – simultaneous and consecutive.

During simultaneous translation, the interpreter is located in a booth. He uses a headset and a microphone and he speaks in the target language at the same time as the speaker talks in the original language. This process is very taxing and exhausting, so simultaneous interpreters take shifts. Usually, those shifts are between 20 and 30 minutes per interpreter.

In consecutive translation, the speaker and interpreter are located in the same room. The interpreter takes notes and waits for the speaker to pause. Then he interprets the previous chunk of what the speaker said. While that seems like an easier task, it usually isn’t. A speaker can speak too fast and the interpreter can have trouble noting what he said. Also, he can be unaccustomed to making pauses when he talks, so the interpreter needs to give him a signal to pause. That itself can be both sensitive and confusing to both.

Where do we find interpreters?

The essence of interpretation

Defining the essence of interpretation, Lion Bridge (above) puts the finger on paraphrasing. “Interpreters need to transpose the source language (language to be translated) within context, preserving its original meaning but rephrasing idioms, colloquialisms, and other culturally-specific references in ways the target audience can understand.”

As they correctly note, “ interpreters may even be required to act as diplomatic mediators in certain environments, and often need to be good public speakers.”

Still, the key lies in the fact that interpreters have to deliver the message in an instance. Either while the speaker is still talking in simultaneous interpretation or when he pauses in consecutive interpretation. This can be in person, in the booth, during a telephone or video conference, or during a live broadcast.

While doing this, he usually has no ability to use any reference materials or dictionaries. This is particularly true with consecutive translation. To do all this, an interpreter has to have “experience, a good memory, and quick reflexes.”

While all interpreters aim for perfect accuracy, it is something that is very hard to achieve in a live setting. Sometimes, in interpretation, things are even left out.

Also, interpreters have to be fluent in both the source and target language. Remember, in most cases, they have no reference materials.

Finally, there is a number of intangible elements interpreters have to handle. They have to catch al the metaphors, analogies and idioms of the speaker. But, they also “ must capture the tone, inflections, voice quality, and other unique elements of the spoken word and then convey these verbal cues to the audience.”

Translators and how they work

So, compared to interpreters, translators should have it easy? But as explained elsewhere, unfortunately, that is not the case. It is just a matter that the process of transferring the words and messages for one language into another differs.

Seemingly, the translators have more time on their hands. Of course, that is not always the case, since ASAP translations sometimes seem like they have to be on the client’s table in an instant.

The reason behind this is the fact that, unlike interpreters, translators have no room for approximation. If every single word does not need to be the same, the maneuvering space when the meaning is concerned does not exist. This is particularly true with specific translation fields like legal, technical or medical.

That is why translators always have translation aids. From various reference materials and dictionaries to so-called CAT (computer-assisted translation) tools, termbases and similar.

The accuracy translators need to achieve they need to be fully aware of all the variations, like dialects in their target language. They also have to pay attention to the cultural implications of certain symbols. And as Interpro (above) notes translators “must have a deep understanding of common cultural practices in the area.”

With more sophisticated technical developments, translators need to also accumulate adequate technical knowledge that will enable them to handle the preparation of translating a document from the moment he receives it to when a client gets it no his table.

How to find a good translator?

Pediaa.com points out that “translators work in a variety of fields and translate various types of documents including commercial, legal, scientific, technical, and literary documents. Key skills of a translator include the ability to understand the source language, the ability to write well and clearly in the target language.”

Working with the written word, it means that in many ways translators at the same time have to be good writers. This is particularly the case when they have to translate literary material.

At the same time, translators often have to be specialists in different fields. This often means that they need to make additional studies in either social or natural sciences.

Translation does not need to be instant. This means that translators should have enough time to reach the accuracy goal in full. They need to check and re-check their translation even before the text reaches an editor.

Interpreters need to have an almost balanced fluency in both source and target language. Professional translators typically work in one direction: their own. (Lion Bridge) Since they (usually) only need to translate source content into their mother tongue, they’re not required to be (fully) fluent in the source language.

As interpreters, translators also have to deal with various metaphors, analogies, and idioms. But since they have more time, their grasp and transfer of those into the target language have to practically be exact.

Interpreter vs translator – complexity as a main joint trait

Pediaa.com (above) presents quite a resourceful diagram of basic elements when considering  interpreter vs translator : 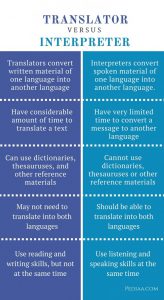 Still, with all the similarities and differences discussed above the key trait when comparing interpreter vs translator is the complexity of both jobs. It is just that each one of them has its own specifics.

Ljubinko Zivkovic
Freelance writer and copywriter since 2016. He has previous experience as a journalist, diplomat, and translator. Ljubinko started working with Bunny Studio in early 2018. Working on all texts with keywords and SEO content, particularly concentrating on writing as a career, translation, and linguistics. Hire this Bunny pro here